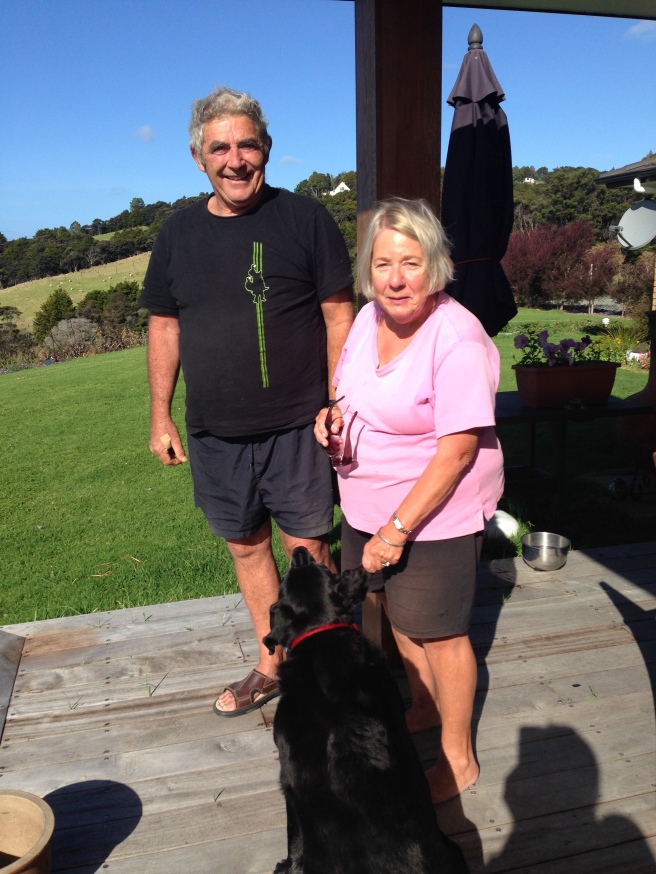 The house where Garth and Clair had recently retired  perched on top of a gentle hill, their farmland spreading out below. Cattle chewed grass by the side of a pond surrounded by cattails and high grass. As we pulled into the unpaved driveway, a black lab with a greying muzzle wiggled in delight as she approached the car. A great blue heron  perched on their well pump. It didn’t ruffle a feather as we passed it. Three alpacas peered at us from behind a fence. I turned to Garth.

“Are you sure Clair won’t mind being surprised by an unannounced guest?” I asked.

“Clair loves guests!” he bellowed. I wondered if she really did, or if Garth might be a bit clueless about the stress that unexpected guests can put on a wife. But the moment I stepped into their home, I could see he was far from clueless.

Clair, all 4 feet 10 inches of her, embraced me in a hearty hug. She exuded the same brand of genuine bonne amie as Garth, and I immediately felt right at home. Clair led us through the living room to the back patio, apologizing as she shooed chickens out of her path.

“These chooks were here when we moved in, and no matter what I do, I can’t keep them out of the house.”

The chickens ran under the patio table. Clair grabbed a broom and  swept the patio, admonishing the chickens as she did so. Doris, Dot and Joan flapped their wings and jumped on the chairs to avoid her broom, but she chased them off and they retired to the edge of the patio, amidst tufts of loose down, grousing their complaints.  We sat down to a cup of tea and fell comfortably into conversation.

Clair and Garth seemed perfectly paired. Like Garth’s years of outdoor work with kids, Clair had taught swimming and water safety to children throughout her adult life. Garth proudly showed me a photograph of a much younger Clair surrounded by children in a pool. The children exuded enthusiasm and reverence, and it was clear that they adored their teacher.   Her passion and appreciation for her charges was easily discernible in her smiling face. Garth bragged about her accomplishments, and she blushed and shushed him.

A neighbor and her 7 year-old son, Jake,  stopped by and joined us on the patio. Jake sat on his mother’s lap and whispered shyly into her ear for a bit, but soon grew bored and restless.  His mother told him to go play and he fairly rocketed off her lap. The boy  busied himself leaping about the property brandishing a toy sword and trying to befriend the alpacas, who wisely sidestepped his advances..

After the neighbors left, Clair turned to Garth. “Why don’t you show Dib the alpacas,” she suggested.

“Sounds good to me. I love animals,” I said.

“And then you’ll stay for tea of course,” said Clair.

In New Zealand, that counts as a dinner invitation. It felt like it might be an imposition. I looked to Garth for confirmation and he grinned and shook his head up and down enthusiastically. There was no way I could say no. So Clair went to put a chook in the oven, thankfully not Doris, Dot or Joan,, and we headed off to see the alpacas.

As we crossed the pasture, Jess, their fat, black lab trotted ahead of us and the chooks followed in our wake. Garth stopped at a fenced in expanse of grass and opened the gate for me. Three alpacas eyed us warily from across the pen, one white, one a rusty brown and one black. I watched as Garth poured out feed into large, round plastic trays on the ground, and they came trotting over.

“Allow me to introduce our friends,” said Garth. “There’s Snowy, Rusty and Captain. Guess which one is which!”

I laughed and asked, “Can I pet them?

“They won’t let you near,” he said. “They came with the farm too and they are still getting used to us.” I settled for pulling out my phone capturing them on video while they ate.

Garth was happy to oblige, and we strolled down the driveway and across a meadow. Garth spoke of the evil of possums, pests that ate the eggs of endangered flightless birds, New Zealand’s precious kiwis.

“We do our best to eradicate them,” he grinned. “But they sure are tasty.”

Garth explained that the cattle actually belonged to a neighbor. He explained how the irrigation system worked. He spoke poetically about the plums on the trees of the small orchard that they’d inherited upon moving. He named the ducks flying overhead.

Then he rubbed his hands together and said, “I think it’s time to have a ginger brandy.”

“Oh, it’s delightful. You’ll have to join me for one.”

We headed back to the house, which was already smelling of roasted chicken and potatoes. I counted the chooks on the terrace and breathed a sigh of relief.  My mouth watered. Garth popped a can of ginger ale and poured it into two tall glasses and then added a liberal dose of brandy, waggling his eyebrows at me as he did so.  He handed me mine, and we sat on the couch as Clair busied herself in the kitchen that opened onto the living room. We traded stories of our families. Garth showed me photos of their 4 children, three boys and a girl, all grown up now and doing well, he added.

“Your daughter is beautiful.” I said.

“I wish she thought so,” Garth answered.

I thought about how I felt about myself as a young woman, how I saw myself as anything but pretty.

“Yes,” it’s hard to have a merciful view of yourself sometimes.”

Garth  handed me a framed photograph of himself at a much younger age.

I tried not to choke on my ginger brandy. Oh my God, he was hot! He certainly was a handsome man now, but his younger self was the kind of guy who made your knees weak. Piercing blue eyes, black curly hair, an easy grin. Wow!

The family stories weren’t all happy ones. Garth candidly informed me that he’d just found out two days ago that his sister had died.

“It was a double suicide with her lover,” he shared. “I hadn’t spoken to her in twenty-five years.”

I was stunned. It was hard to believe that the grinning trickster I’d spent the day with had just suffered such a profound and sudden loss.

“That must have been awful to hear,” I offered, not quite sure of what else to say.

Garth nodded and sat quietly for a moment. Then he shook his head slowly.

“I don’t know where those 25 years went. Where did they go?”

“I wouldn’t know,” I said. “I am estranged from my sister too. There’s only the two of us, and she can go years without speaking to me. She didn’t even pick up the phone when she heard I was sick. Families aren’t always what we want them to be.”

“Well, you’re family now,” Clair piped up. “So you and Mark will just have to stay with us when you bring him back here.”

Our conversation was so rich and comfortable, it hurt to leave. At the end of the evening, they packed up some fresh eggs from “the girls”, and Garth gave me a poster of a well known NZ cave called the Lost World.

Clair hugged me tight and said brusquely, “I’m awful at goodbyes. I don’t do them well.” I saw that her eyes were welling and I knew we were sisters in that regard.

“Me neither,” I admitted.

Garth drove me home. Walking me to the door, he pointed out Jupiter in the night sky hanging over the beach.

In my journal that night, I poured over the day’s events.

Today was all about giving up control, trusting in the universe, resting in the unknown, relying on an expert, focusing on the path and the foothold, whether it be stone or man made in the moment, turning off the light to see the magic, letting the day lead me, opening my heart to strangers, accepting their hospitality and kindness, allowing myself to be taken care of. It was about sharing my story and hearing theirs, watching the sun lower over the fields as two herons flew off into the evening, watching the bunny dash across the road as Garth drove me home, spending the day laughing and feeling proud of my physical accomplishments, coming out caked with mud. Life doesn’t get better than this. 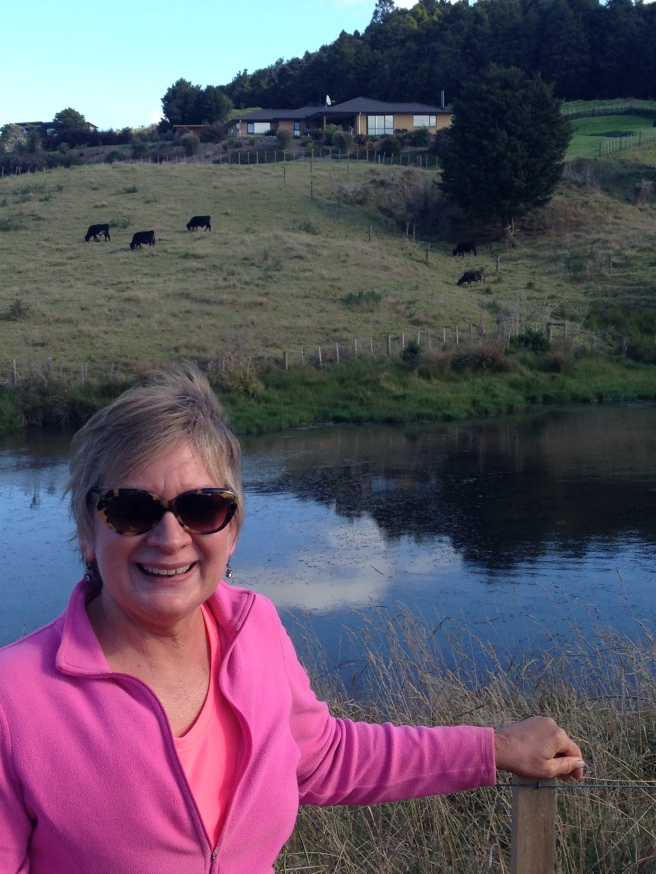