During my recent travels to the Czech Republic, I had the opportunity to learn about two populations that I knew little or nothing about: the children of Lidice and the children of Chanov. Our hosts, Jiri & Marketa Kralovec of the Klicek Foundation, arranged a day long outing to honor one group and to serve the other.

A few days prior, Marketa had given me a book

that told the story of the massacre of an entire village during World War II. It is a chilling and heartbreaking narrative of the fates of 82 children between the ages of 1 to 16. In response to the assassination of Reich Protector Reinhard Heydrich in 1942, the Nazis sought retribution by shooting all the men of Lidice (aged 15 and up), transporting the women to concentration camps, and murdering the children en mass by gassing them in a truck. Not even the dead were spared, their graves looted along with everyone’s homes and businesses, before the Nazis burned everything to the ground.

We arrived at the historical site of Lidice, the midday sun unrelenting in the early Spring heatwave. We made our way over rolling green lawns to the memorial (Pamatnik Lidice) that overlooks the expanse of land where the village once lay. No book could have prepared me for the impact of the life-sized collection of sculptures embodying the 82 murdered children. I stood before them and wept for these children and all those murdered during the Holocaust. I wept at the cruelty of human beings. I wept for the legacy that lives on in the DNA of my life partner, his parents having survived Auschwitz at the tender ages of 12 and 15. They could have been these children. In some ways, they were.

The artist Marie Uchytilová created the memorial in the 1990’s, but died before she was able to complete the sculptures. Jiri described paying a visit to their friend, Marie, during her selfless work. The haunting presence of the children’s likenesses in the fading light cast shadows as they drank tea and chatted late into the night. “She informed us that she often spoke to the children as she crafted their images,” Jiri said. “And she tried to find out everything she could about each one, so that she could truly fashion their souls.” 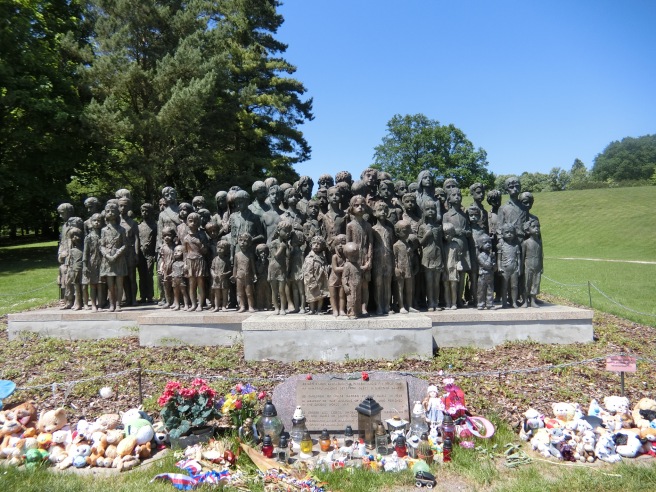 We left the children and walked in silence back to the van.  We traveled on, stopping for a tour of the pediatric ward of a hospital before moving on to the last leg of our journey. We had little idea of what awaited us as we drove north west to Most in Bohemia and the Chanov housing estate. Of course Marketa had told us about our upcoming visit. Borivoj, (all names of patients and children have been changed to protect their privacy) a brain cancer survivor, had attended the Klicek  summer camp as an ill teen. Marketa and Jiri stayed in touch with Borivoj and his family, visiting them occasionally over the years. On one such visit, Marketa took notice of the many children of the neighborhood, hanging out with seemingly little to do. She was moved by their plight, and vowed to return to set up an afternoon of play on a monthly basis.

“No one goes there,” she said as she prepared food for our day’s journey. “It is the poorest and most dangerous part of the Czech Republic. If people do go there, it is to make themselves feel better, handing out candy and toys, and getting back in their cars, not really just being with the children or connecting with them.” As Marketa described the situation, I thought of the untouchables in India.

According to Wikipedia, “[t]he Chánov housing is these days perceived by many Czechs as among the worst examples of ghettoization of the Czech Romany population and has been described as “the housing estate of horror”, “a hygienic time bomb”, “a black stain” and the “Czech Bronx”. The Roma tenants of Chanov fare dreadfully in today’s Czech Republic, relegated to institutionalized country-wide discrimination, racism, marginalization and poverty. The Roma are largely unemployed.  94% of the people have only a primary education, if that.  38% of the population are children under the age of 15.

Word of our coming had spread, and over 60 of these children and their parents greeted us as our van pulled up in front of the Chanov school, skirted by an astroturf football field. The children gathered eagerly and Marketa divided them into two groups, challenging them to a contest.

“All right!” she coached them. “Let’s see who has better English, the boys or the girls!” I was the designated judge, and the girls surrounded me eagerly. “My name is Anuska,” piped up one girl sporting polka dot shorts and a bright pink t-shirt emblazoned with the head of a blue giraffe. “What is your name?”  “What color are your eyes?” “One, two three…”  Other girls chimed in, counting up to fifteen with pride. “How old are you?” asked another. Then, they all started to sing, “Head and shoulders, knees and toes, knees and toes!”

The boys jockeyed for attention, keen to tease and one up one another in the process. “My name is…” began one, and several interrupted to shout him down with their own introductions. They jabbed and pushed one another, joking and laughing and even yanking down one boy’s shorts as they showed off their skills. Definitely a different energy than the girls!

Capitalizing on the bit if English they knew (way more than my Czech, I might add!)  I asked the children to show me some of their games, awkwardly pantomiming patty cake. After humoring me by joining in, the girls broke into a much more  intricate version, clapping their hands in a fast paced rhythm that left me in the dust. Then the kids introduced me to the game Baba (If I am spelling that right). Figuring out the rules was easy, as they ran up to me, tapped me none to gently on the back, yelled “Baba!” with great enthusiasm, and ran away from me. Oh, the Czech version of tag – I get it! In fact, there are many games that translate across cultures.

The children eventually broke off into smaller groups, some to draw on the parking lot with colored chalk that Marketa had brought, and some to start up a game of soccer. The play specialist volunteers set up a makeshift hair salon, brushing the girls’ hair and styling both boys and girls alike using many mini rubber bands. 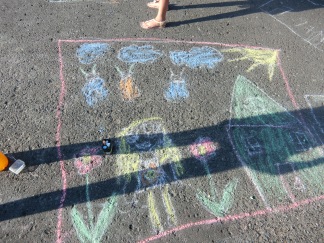 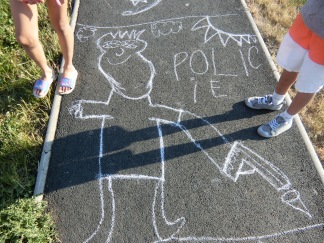 Several children showed us their dancing skills, and my colleague, Marifer Busqueta from Mexico City, engaged them in a few Latina moves.

One group of boys made their way to a large sand pit at the edge of the football field. They dragged over two box springs, the rusty inner workings of mattresses, piling them up to act as a springboard for their acrobatics. And so the real show of the day began. The boys, singly and in pairs, ran pell mell at the springs and leapt upon them, catapulting themselves into the air in arching flips and tumbles. They showed no fear, but my heart beat fast and hard in my chest as they flew past me, landing triumphantly in the sand. I couldn’t help but think of the framed photograph hanging in my bedroom back home of children in a 1980’s South Bronx  performing similar feats of daring.

Towards the end of the day, Jiri Jr. corralled the kids into the cement bleachers to pose for a group photo.  There was homemade gingerbread for all, and one child split her treat in half to share with Marifer, before enjoying the sliver left over for her. We spent 4 hours altogether with the kids, before collapsing exhausted into the van and heading home to the comforts of Malejovice. Hot running water and electricity would greet us, although no such luxury awaited the children of Chanov. The joy of a day of cross-cultural play with wonderful kids lay juxtaposed in my mind with thoughts of children in historical and current contexts. When hate and racism allow us marginalize, ghettoize, and incarcerate a segment of any population, keeping them from sharing in the most basic of human rights (employment, access to medical care, decent living conditions and education), how far are we from enacting the fate of the children of Lidice upon our own children?

One thought on “The Children of Chanov and Lidice”