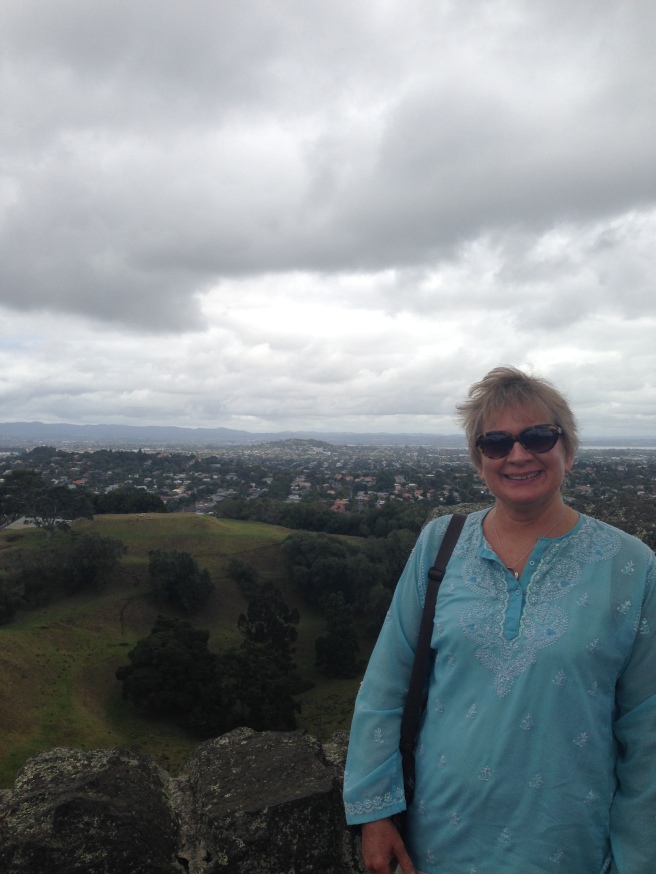 Three planes and over 24 hours later, the North Island of New Zealand came into view as the plane made its way down through the clouds and circled for a landing. Excitement began to tilt the scales of anxiety as I disembarked and made my way through customs. Robyn, a member of the conference planning committee, had planned to meet me and escort me to the hotel. I scanned the group of people awaiting loved ones. I assumed that Robyn would be holding a placard with my name on it. No such luck. I milled around for about five minutes, before I heard a woman’s voice calling me.

“Dib?” her New Zealand accent changing e’s into i’s. Her cheerful smile and mom-like warmth were exactly what I needed to see,

“I can’t believe you came all this way to speak at our little conference!” she exclaimed, brushing her hand through her pageboy light brown hair.

“How could I turn down such a wonderful invitation?” I answered.

Robyn’s generosity along with that of the other conference planners was pleasantly overwhelming. The initial invitation to speak at the conference came from Marianne, the founder of the Hospital Play Association in New Zealand. Via e-mail, without ever having met me, she made an astounding offer. Not only were they going to pay my way to come to New Zealand, but she had heard that I was writing a book. She owned a house at Lang’s Beach on the North Island and asked if I would like to stay on for a month to do some writing. The dream of this house had been a rallying point for me during medical treatment. I would lie on the linear accelerator table receiving daily doses of radiation and picture my toes in the sand and a journal in my lap. 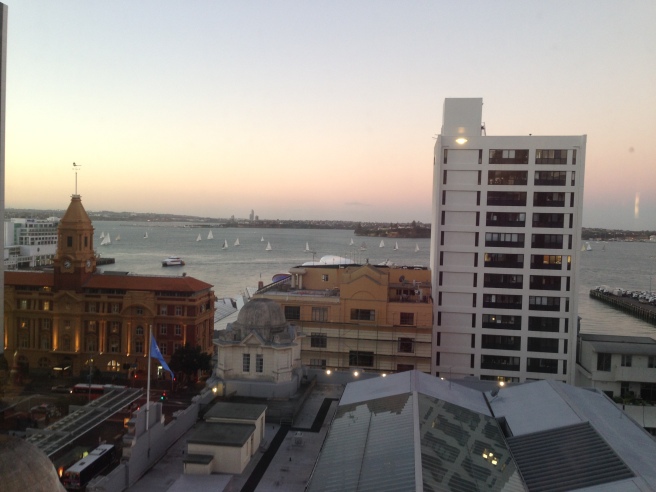 My hotel room on the upper floor overlooked the city harbor, where fleets of sailing boats graced the waters. A gift basket of New Zealand teas welcomed me as I entered the room. I unpacked and fell happily into the king-sized bed and slept.

Marianne was a wonderful host in Auckland. She supplied me with a list of places to go and things to do. She picked me up at the hotel the morning after my arrival and we toured some volcanoes, along with Robyn’s Hospital Play department at the local hospital.

The volcanoes were lovely and afforded great views, but nerd that I am, I loved seeing the lay of the land in Robyn’s hospital even more.  In New Zealand, hospital play specialists have different training than American child life specialists. For the most part, they have backgrounds in early childhood education, and certification through the Hospital Play Specialist Association. Their departments are funded by both the Department of Health and the Department of Education, and their programs must meet the curricular requirements of early childhood education.  This allows for an approach steeped in a thorough grasp of child development and how children learn. 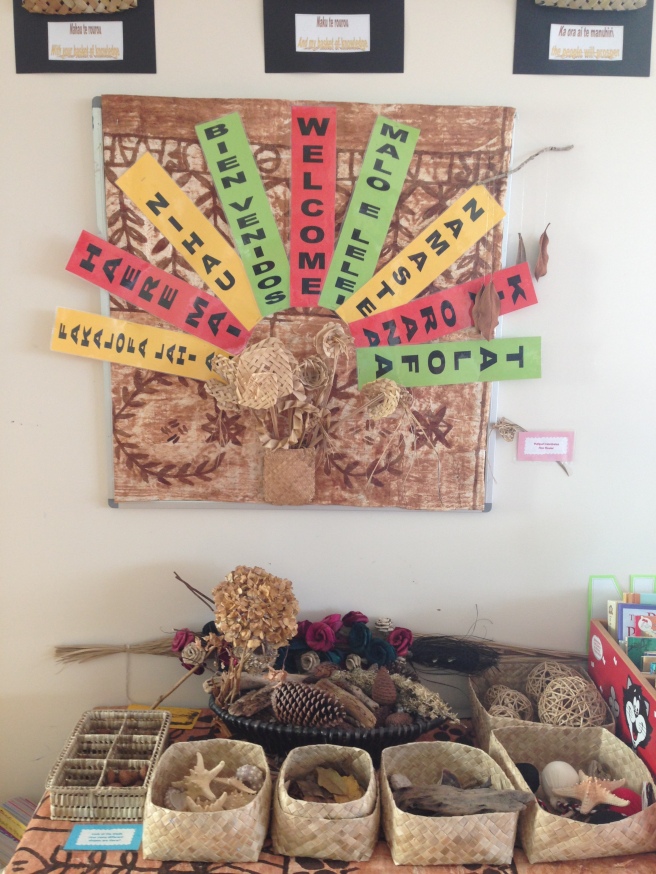 I was pleased to see that every one of the hospital playrooms mirrored best practice in early childhood education.  Each playroom recognized the bicultural nature of the country, embracing literacy and cultural objects from both the tangata whenua (people of the land – Māori) and the tangata tiriti (the people there by virtue of the Treaty of Waitangi – non-Māori). A huge handmade sign welcomed visitors in several languages, including  English, Maori, Samoan, Hindi, and French. Beneath it stood a table laden with baskets. Each basket held items from nature, shells, rocks, pinecones,  inviting exploration and touch. 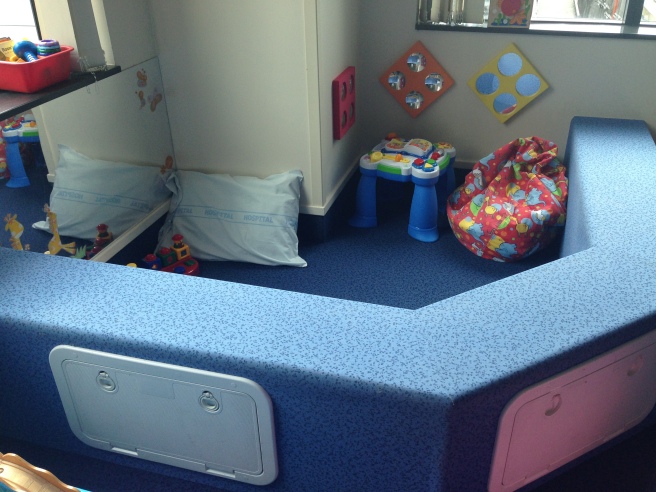 The room housed areas, furniture and toys dedicated to certain age groups and open ended play. An infant area was ingeniously sectioned off by a  foot high cushioned wall that allowed caregivers to sit while their wards explored toys safely out of the way of older children. Outdoor play spaces provided room for kids to move their bodies. My favorite part by far was the presence of  a medical play corner in every playroom. For all of our credentials and degrees in the United States, I see far too few play spaces in New York area hospitals that allow children to explore their medical treatment freely without adult direction. 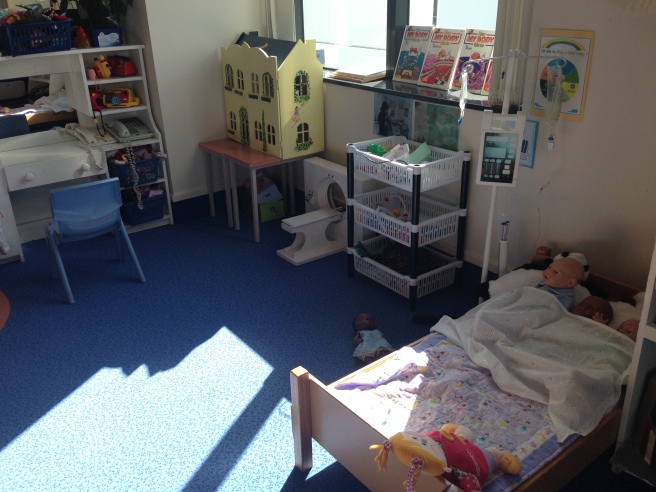 In one playroom a block construction stood on an area rug with a sign saying “Building in progress”. This was a clear sign of respect for the child architect.

Treatment rooms and the emergency department had toys visible and available to all. 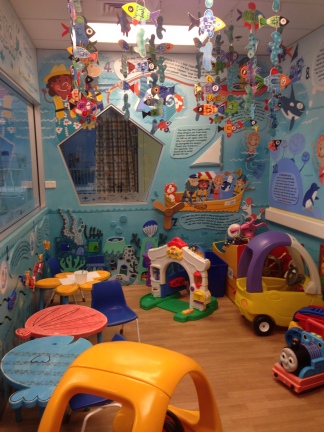 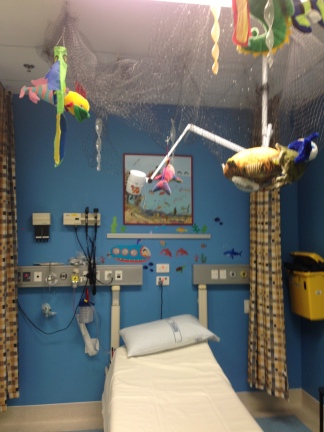 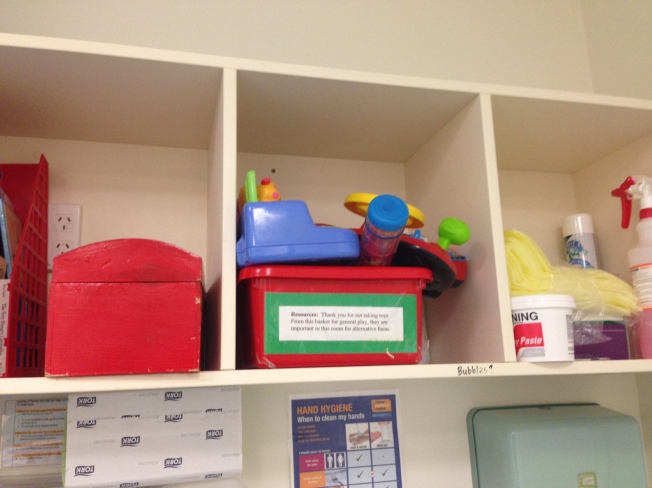 “We leave these toys here in the treatment room,” said Robyn, “so that the doctors and nurses can use them with the children if we aren’t available.”

I loved the idea of play specialists sharing their knowledge and supplies with the medical team. It showed a pathway of collaboration that is sometimes lost in the mix of territorialism and insecurity.

At the entrance to the hospital stood a fifteen foot tall wooden sculpture of an adult holding a child. It resembled a totem pole and its smooth polished surface made my fingers itch to touch it. I was surprised when Robyn said that I actually could. This hospital invited interaction from the moment one stepped through its welcoming doors. 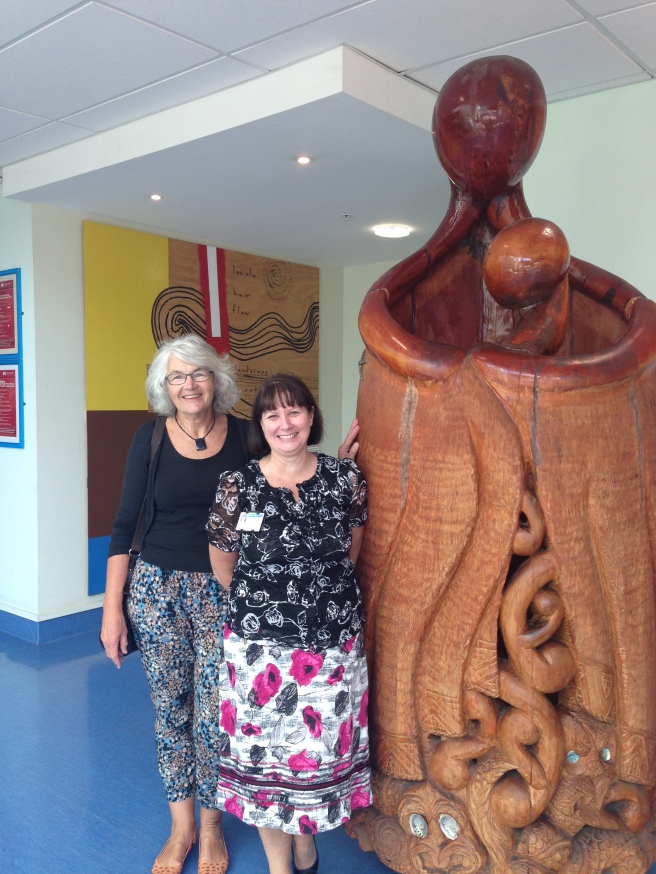 In addition to my tours with MaryAnne and Robyn,  I had several days to acclimate to the 17-hour time change and do some sightseeing on my own before the start of the conference. On my second morning there, the harbor beckoned me and I took a ferryboat out to the peninsula across the water and spent the day exploring the sights and shops in the quaint town of Devonport. It was a gorgeous early fall day below the equator. The sun reflected brightly off the water as I sat in the bow of the ferry enjoying the wind on my face. 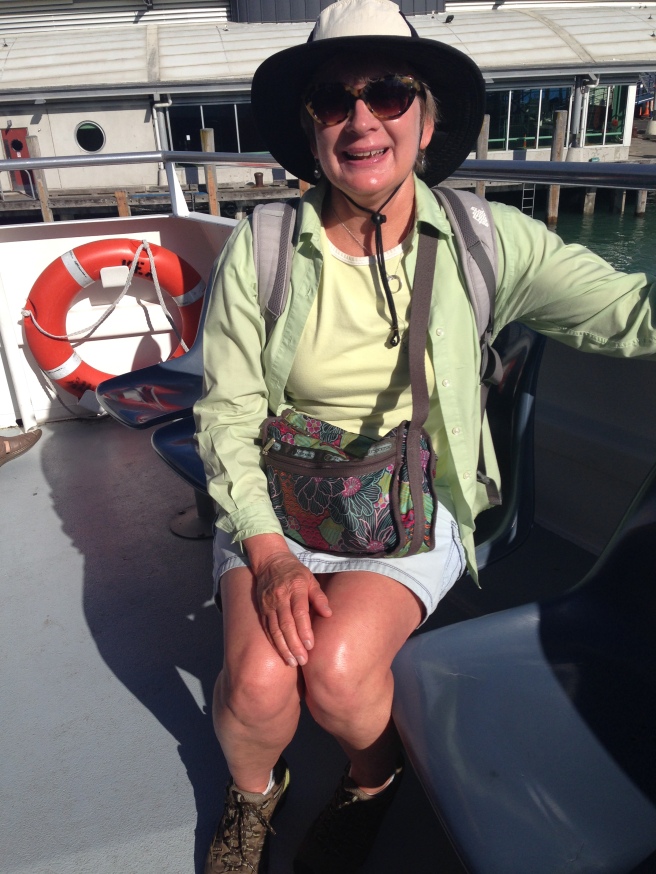 I’d decided to head for the smaller summit of the two defunct volcanoes that rose from the peninsula. I figured that I would start small and see how I felt after that climb. So as I disembarked the ferry, I hoisted my backpack onto my shoulders and followed the footpath along the water’s edge to the green hill rising in the distance. I soon came upon a long pier leading out into the turquoise harbor. Men lined the edges of the furthest dock, overseeing fishing poles perched in holders along the edge of the pier. I walked the length of the pier, enjoying the feel of the wooden slats beneath my feet. When I reached the fishermen, I pulled out my journal and sat quietly sketching them, as gulls skittered and laughed, diving for unseen fish beneath the dock. 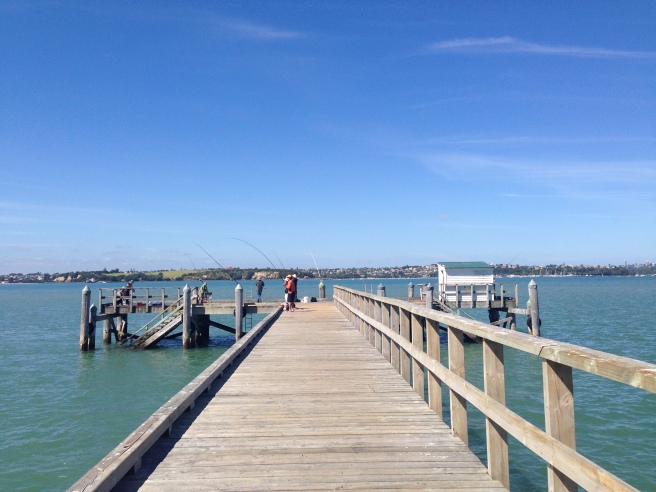 From there, I continued on to the hill where a gentle path spiralled up along its perimeter. Lush grass and wildflowers dotted the hillside. I passed some tourists, but not many. Near the summit, I sat on a bench to rest a bit, and drank gratefully from my water bottle. The New Zealand sun, stronger on this side of the equator,  was beating down and despite the breeze, I was overheated.  I wiped my brow with my t-shirt and then leaned back to catch my breath. The harbor spread out below me, the sun glinting off the calm water. Sail boats tacked back and forth, and the shouts of children wafted up from a beach below. I closed my eyes and listened to the sounds of water, wind and birdsong. In that moment, I felt small, grounded and whole, all at once. I was here, and that was enough. 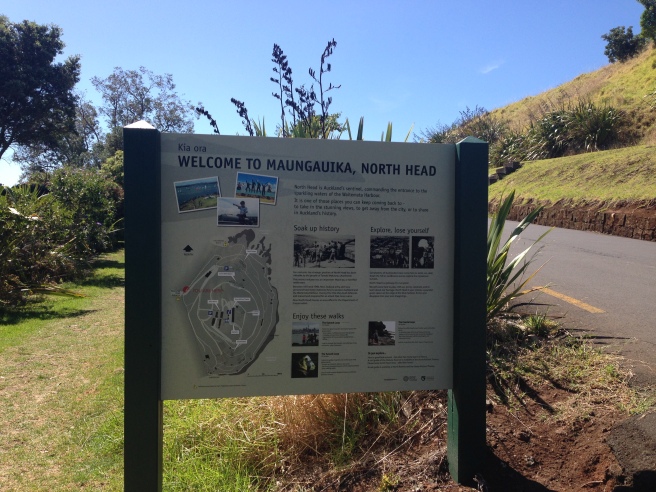 6 thoughts on “Driving the Camel: Installment #7”